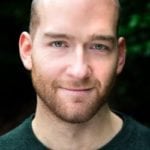 Hannes is a dancer and choreographer based in London. Throughout his career, he has worked and collaborated with artist and companies like William Forsythe, Angelin Preljocaj, Wayne McGregor, Akram Khan, Fabulous Beast and Punchdrunk to name a few. In 2007 he joined DV8 Physical Theatre to be part of the original cast of the critically acclaimed stage productions “To Be Straight With You” (2007-2009, nominated for an Olivier Award) and “Can We Talk About This?” (2010-2012). In 2014, Hannes was appointed DV8’s Creative Associate and played the title character in their production “JOHN”. He is currently Creative Associate and Tour Director for the re-creation of DV8’s Enter Achilles (produced by Rambert and Sadler’s Wells).

Hannes’s own artistic work comprises two full-length productions: “DANDELION” (with Ermira Goro for The Onassis Cultural Center in Athens), and “UNRUHE” (for and with the Susanne Linke Dance Company) and he created works for The London Eye Company, Munich Dance Festival, London Contemporary Dance School, VERVE and others.
He is a sought after teacher and workshop leader working internationally across dance, physical theatre and vocal/text work and is committed to exchanging ideas and supporting new talent.
Hannes is part of a selected collective of 50 international artists from 29 different countries that had the unique opportunity to spend a 10-week intensive period with David Zambrano in Costa Rica in 2010. He has integrated the philosophies of “Flying-Low” and “Passing Through” in his own artistic work and teachings.
Hannes is also a certified Yoga teacher and has completed his Teacher Training under the guidance of Cat Alip-Douglas and Phil Douglas at the renowned Sangyé Yoga School in London.
In 2015, Hannes was nominated as one of the 100 most influential and innovative people working across Britain’s creative industries by The Hospital Club London.
www.hanneslangolf.com
single-contributors
Back to Top