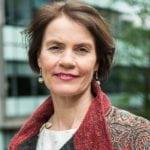 Helena Gaunt is a musician, author and thought-leader on professional education and practice in the performing arts. She is Principal of the Royal Welsh College of Music & Drama (RWCMD) and a Professor, having previously been Vice Principal and Director of Innovation at the Guildhall School of Music & Drama in London. She sits on the Council of the Royal Philharmonic Society, and has a leading role for the European Association of Conservatoire’s major project Strengthening Music in Society.

Having joined RWCMD in 2018, Helena is relishing the opportunities and challenges of serving a national conservatoire, and the imperatives for bold vision which these bring. Whilst at the Guildhall she initiated and directed the international Reflective Conservatoire Conference, chaired the Innovative Conservatoire (ICON) partnership, and set up the Guildhall Creative Entrepreneurs scheme in collaboration with Michelle Wright, CEO of Cause4, incubating over 40 new businesses in the performing arts.

Helena was a professional oboist for many years, and founding member of the Britten Sinfonia. Alongside this she developed research expertise, with major publications including Musicians in the Making: Pathways to Creative Performance (2017)co-edited with Professor John Rink and Professor Aaron Williamon, and Collaborative Learning in Higher Music Education (2013)co-edited with Professor Heidi Westerlund. She is a National Teaching Fellow (2009) and Principal Fellow of the Higher Education Academy. She is also a member of the Livery of the Worshipful Company of Skinners, and a Governor of Tonbridge School. She lives in Cardiff and has five children, including two sets of twins.